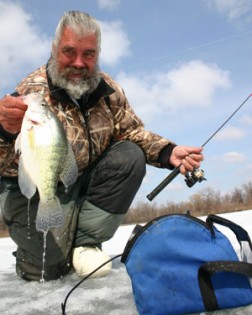 Dick “Griz” Grzywinski has a face you’ll remember and a personality you can’t forget. “Griz”, as he’s affectionately known, isn’t nearly as cantankerous as his name might indicate.

Born in 1942 in St. Paul’s east side, his parents began taking him along on their fishing trips when he was just three-months old. “They placed me in a picnic basket and set it in the boat,” says Griz. “My ma and dad fished back then as much as I do now.” 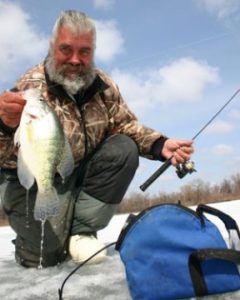 Though Griz has been guiding others his entire life, he didn’t start getting paid for it until about 35 years ago. In the early years, Griz’s business card said, “Have Boat, Will Travel” and he typically slept in his truck while guiding on hundreds of lakes. “When I’d go on the road people would make fun of my “plastic pants” because they’d get so shiny from all the fish slime,” admits Griz. Today, Griz spends 275-300 days per year fishing. “The rest of the time I’m hunting” he says.

In the 1980s Griz was one of the legendary guides who worked at Camp Fish near Walker, MN. In 1990 Griz and Dick Sternberg spearheaded a movement to have Pool 2 of the Mississippi closed to walleye harvest. “I hope that doesn’t change,” says Griz. “It’s one of the greatest places in the Midwest for catching trophy walleyes.”

Griz has guided notable figures such as Walter Mondale, Billy Martin and Kent Hrbek. He admits that he occasionally forgets names, “but I never forget a rockpile” Griz says with a smile.

Reflecting on his upbringing, Griz offers this bit of advice to anglers; “My dad taught me about fishing when I was younger and I taught him when he was older. Good anglers change with the times and my dad was sometimes stuck in his angling ways. Being flexible on the water is what puts more fish in the boat.”